It’s been a couple of days, so I figured an update was in order. First, the oatgurt was….GROSS. Bleh. I think I let it ferment for too long and it ended up spoiling. It looked like the pictures, with the crust over the top that looked a little like sourdough bread, but it smelled…different….like how I remember the dumpsters behind my elementary school smelling. Nonetheless, I mustered my strength and tried a bite. Not very good. “Maybe it needs some flavoring,” I thought, and added honey and Almond Butter. Another bite…”mmpgh,” the sound of me running to the kitchen sink to spit it out before I hurled it onto the floor. So, needless to say, the rest is going down the disposal, and if we try again, we’re only letting it go for 24 hours.

Dinner last night was some excellent potato hash that Joey made (check out the recipe HERE). It was incredibly tasty with a little hot sauce and some ketchup!

Here’s a pic of the raw almond butter that I made the other night! I didn’t process it for long enough, so it’s pretty thick, but I’m learning that it’s good on/in pretty much anything! Yesterday, I put a little in my brown rice and added some sesame furikake for a savory, nutty treat! Today, I had it in oatmeal, and I thinned a little out and put it on some steamed broccoli, which was interesting, but not bad at all! I’ll definitely roast the almonds before the next batch, though…it’s supposed to do wonders for the flavor.

Here’s a side-shot, and yes, we do recycle our glass jars. We used to mix up powdered milk, and it tastes better when kept in the fridge in glass containers. They also come in handy for sauces and stuff like this, and the jars and lids go through the dishwasher just fine. Why buy thousands of plastic containers when you’re almost sure to have used something in a glass jar recently?? 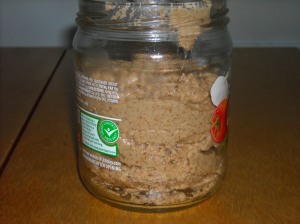 And now, for a little kitty pron….Joey got some really good shots of Shelli playing around the other night in the box that our new water heater came in. It never ceases to amaze me how you’ll spend hundreds of dollars on fancy cat toys and perches and “trees” and whatnot, and a giant cardboard box ends up being what she goes nuts for. 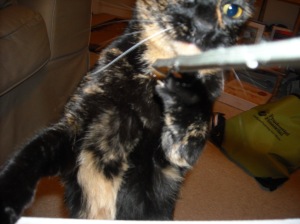 Daddy got her riled up with the wrist strap for my camera in this shot; she was definitely entertaining to watch.
Tomorrow’s Joey’s super-early day again (going to Wake Forest), so he’ll be up and moving before 3 am. Gotta love it. I’m so proud of him.