Good Evening, bloggity blog folks:). Today has been better than the typical Monday and for that, I am extremely grateful. I was really overwhelmed today about the amount of schoolwork I’ve got this week (mostly because I procrastinated too much), but after finishing up my paper before lunch was over today, I felt much better about the potential that I’ll finish the week without having a nervous breakdown.

So, in keeping with the spirit of my Vegan Challenge Week in honor of World Vegan Day on November First, I had 2 tbsp of peanut butter at home before I left for work, a travel mug of coffee and soymilk, and then 1/2 cup oatmeal with salt and pepper around 10 am.

For lunch, I had this: 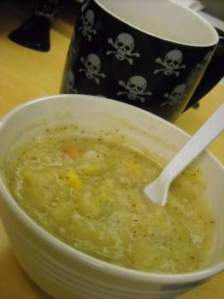 Yep! Last night’s Potato-Veggie Soup (recipe can be found HERE). It’s thick and hearty and warm, and I added a TON Of pepper, so it was nice and spicy too.

To celebrate after finishing my paper and getting my work-work done for the day, I had this apple: 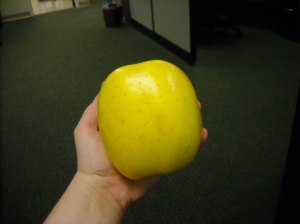 I know…it’s so freaking huge…this was one of the Mutsu apples that we got at the apple picking festival in Waynesville last weekend while we were camping.
Dinner was some angel hair pasta and garden veggie spaghetti sauce with tons of garlic powder and a little nutritional yeast.
Check out this post from Vegan Soapbox. Yes, I know what everyone says about statistics, and, for the most part, I agree. However, it’s hard to deny that it does require a huge amount of food and energy to raise animals for human consumption. It takes far less energy to avoid the “middle man” (or “middle meat,” perhaps) and eat a plant-based diet. Veganism is a way to tread lightly on the earth.

Hopefully, tomorrow will be low-key as well. I’ll have schoolwork to do, but hopefully Joey will be further along with his paper and we’ll be able to relax and watch a little NCIS!

For your viewing pleasure, look at that little pouty face!! 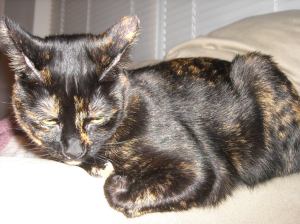