Yes, we’re home.  We got in Tuesday evening (two hours later than we were supposed to, thanks to stupid DELTA Airlines) and I went back to work yesterday (probably not the best decision because I was mostly worthless).  The wedding site was beautiful; Bridal Veil Lakes, a private park, gave the bridal party the run of the place for the entire day, including the lake and canoes.  Joey got lots of beautiful pictures, but I’ll just post mine because some are going to Tobacco Road Creations!  Stay tuned for more on that:).

That was a park bench that sat on a ledge over a rushing stream (it was rushing pretty quickly and was LOUD!). 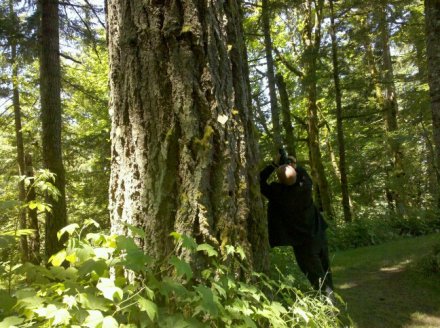 The pine trees there were huge; it was incredible to see, since we mow down any tree that gets to be tall here in Charlotte….and then replace it with a smelly Bradford Pear Tree.  I got a pic of Joey shooting a pic so you could get an idea of just how much the trees were.  It was amazing.

As far as the rest of Portland?  There was Powell’s Book Store.  There was the Portland Zoo.  There was Extremo the Clown.

And, thank goodness, we are now home.  For all of my gripes about Charlotte politics, money mismanagement, and government corruption, I was ready to kiss the ground when we finally got off the plane.  There is truly no place like home.