Hello, bloggies!  I am typing this from a folding chair, fifteen feet from a campfire (because it’s probably already 75* outside), listening to the cicadas in the trees:).  The trip we’ve waited a whole year for has finallycome, and we are truly relaxing at long last.  The campground is quaint and clean, and the husband and wife who own it are absolutely darling!

Yesterday was a busy, but great day…busy in that we did a lot, but not the “bad” kind of busy that is everyday life.  After enjoying campfire coffee and a breakfast of champions (eggs and bacon in a cast-iron skillet and a piece of toast), we hit the road for a horseback riding experience at Smoky Mountain Stables.  Pictures of me on the horse will have to come later because they’re on a CD that we bought from the place, but here’s a pic of the four of us while we were waiting our turn for the trail ride:

The trail that we rode was about four miles and took a little over an hour.  My horse was named Daisy!!  Like Daisy the Curly Cat!  I was greatly thrilled by this…she was a black and white pinto, and she had a great disposition.  I barely had to do anything but pull her back every now and then because she would ride up on Shannon’s horse, Holler.  Joey ended up on Big Ben, a Clydesdale mix (he wasn’t nearly as big as an actual Clydesdale, but did have tiny fetlocks at his hooves.  He was beautiful).  We went across a few creeks and went way up into the mountain (and back down).  Our trail guide, Glen, was interesting; he’d actually worked for William Shatner for ten years and made a few World Champions!  I pet Daisy a lot while we were riding.  My butt is sore today, but it was totally worth it, and, after a lifetime love affair with horses from afar, I could totally see myself owning one someday.

We were STARVED after the ride (they do say that horseback riding burns a fair amount of calories), so we headed to Hard Rock Cafe, James’ choice (and who’s going to turn down the newly-returned soldier!).  The Hard Rock here is much classier than the one at Myrtle Beach, and I was pleasantly surprised.  Our booth had a shadow box on the wall with a vest that Jimi Hendrix wore at a concert.  Did you know that Mickey Dolenz picked Jimi Hendrix to open for the Monkees on their ’67 tour?  He wasn’t a good fit (of course) and left the tour, I believe.  But an interesting fact from your resident Monkees geek:)

I picked the least unhealthy thing on the menu…I forgot what it was called…Mandarin Glazed Grilled Chicken Salad.  It was very good…grilled chicken pieces, red peppers, red onions, toasted pecans and blue cheese, tossed in a light orange vinaigrette.  And there were no croutons or bread or anything, so that was good.  Ignore the fry on the side of the plate.  There were three more before I took the picture:). 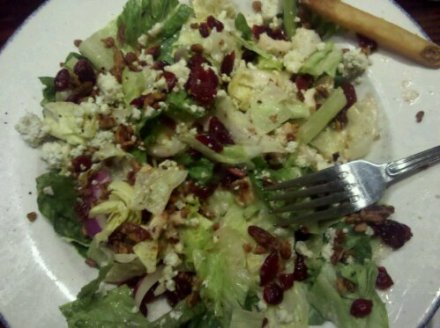 After that, we headed out to Sevierville to visit the Forbidden Caverns.  Wow.  I’ve never actually been in a cavern before, so I was amazed at how incredible the natural formations were that had formed over thousands of years.  At our deepest point, we were about six hundred feet underground, and you’d often get dripped on by the water that was still forming stalactites.  It was pretty awesome.  This shot is kind of blurry…my camera didn’t do very well in there beacuse their own lighting was screwing with my focus:

This shot is pretty good; it was lit red, so it looked kind of like Hell, though: 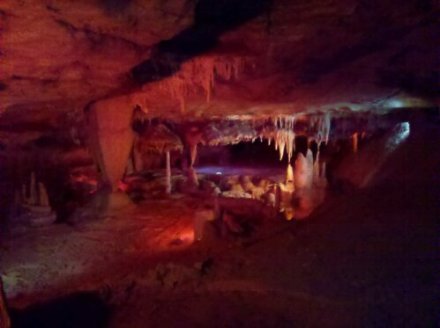 Interestingly, the cavern was a haven, both for Cherokee Indians, and then later for Tennessee Moonshiners.  There were piles of rubble from where the Revenuer came down and busted up the stills, and there was also an intact still that you could see.  I also saw a bat (I love bats and think they are actually quite cute).

James made taco meat for dinner; I avoided the tortilla and just did the meat and onion, plenty of salsa, and a little cheese.  It was really good and I went back for seconds.  We’ve made friends with our new neighbors; they showed us the inside of their new camper, and when they came out in the evening after they’d set up, we invited them to sit with us around the fire and we all talked NASCAR for a while.  They have a little mutt named Baby who is adorable and quite loving.

I have no idea what’s on the dockett for today; Joey made coffee that I’m letting cool (for those of you who’ve never made coffee on a campfire before, it starts out at approximately the same temperature as lava, and then gradually cools down to a level that you can drink without immediately napalming your tongue).  James and Shannon just got back from the bath house and Joey will be back soon, so I’m sure we’ll get some breakfast going and then see what the day holds:).

I hope this finds you all well, and for any readers that I may have that are at the Healthy Living Summit, I hope you guys are having a blast!  I’m keeping up via Twitter and blogs!