Friday was the worst day ever.  It started out as a bad day at work (that began at 7:15, mind you…my days don’t usually tank at work until after 9 or so when they do go badly), which left me feeling pretty worthless, incompetent and overwhelmed.  Then, a note comes across my Facebook news feed about a Monkees tour…and I’m thinking “Great!  They’re going to tour next year!!”  And then I look closer and it’s their 45th anniversary tour.  And I already missed the one show they did in the south.  And I’m heartbroken.  I cried all the way through lunch.  Joey kept texting me offering for us to fly out west or something so we could see a later concert, but I couldn’t justify hundreds of dollars on a trip like that.  I sent him a short text telling him to leave me alone and quit getting my hopes up.

And then I get a text from him that says that tickets are still available for the concert Sunday in Vienna, VA.  It was my only chance, so I told him to go ahead…

The view from the EIGHTH ROW was amazing!!

I didn’t get any really good shots of them, because my camera was fuzzy, but here they are! 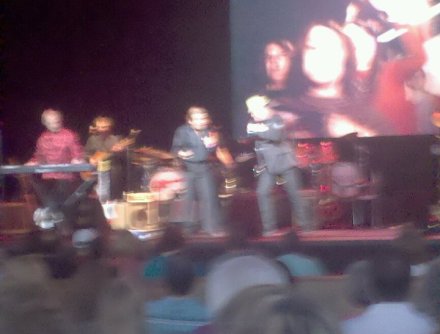 The best thing was that no one in front of me stood up, so I even got EYE CONTACT!!  And Peter did a double-take at the beginning of Shades of Grey because I used Joey’s “Zippo Lighter” app on his phone and waved it in the air.  It was fantastic. 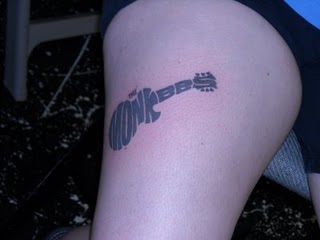 When I was five, my mom played their “Greatest Hits” album on the record player and the rest is history.  They’re why I love music.  They were why I started to sing.  They’re why I wanted a guitar.  When I was six, my class did a play where we sang songs, and the music teacher recorded me singing them so the other kids would have something to sing to.  After I recorded, she asked me, “where did you get your voice?”  And, in six-year-old earnest, answered her, “THE MONKEES!!”

And it was a twice-in-a-lifetime event…I saw their 30th reunion tour 15 years ago as well.  It made my entire life, guys.  Joey managed to pull off the GREATEST 30th birthday present in the world.

I was totally the crazy fan, jumping up and down, screaming, flailing my arms trying to get their attention, and singing to EVERY song.  I was in absolute, complete, and total heaven.

Talk about a whirlwind, though…we left at 9:30 yesterday morning, drove to Washington, DC for the concert at 8, got back on the road at 10:30, and drove all night to get home at 5:30 this morning. Thankfully, my boss was kind enough to give me today off last-minute so I didn’t have to go straight to work after that.

This was a weekend that I will never forget for as long as I live.

3 thoughts on “Twice in a Lifetime…”