We are enjoying our final camping “hurrah” of the year; I always take the week of Thanksgiving off from work for several reasons…it’s Joey’s and my anniversary week, it only requires three vacation days rather than the full five, and most of my coworkers like to take time off at Christmas and I like Thansgiving better anyway.

Joey and I usually try to plan a vacation of some sort during that week, ever since our honeymoon in 2002; it’s funny…we planned our wedding around Thanksgiving break since we were both still in college and needed to plan it around school vacation:).  We’ve always been practical, I suppose.

Anyway, with as much stress as we’ve had lately, between my recovery of the “mental holocaust” of 2011 and our various work-and-school related deadlines and drama, Joey and I really haven’t gotten any time to just rest.  So, we’ve packed up the camper and gone to Black Mountain for a little R&R.

Here’s my attempt at looking thuggish in my newly knitted Slouchy Hipster Hat which is a fantastic free pattern from one of my favorite knit-bloggers, Crazy Aunt Purl.  It’s a little big on me, so I’ll probably knit another one with smaller needles, but it’s very cute, and it has come in very handy with how chilly it’s been up here.

A nighttime fire pic, as I take on every trip.  Everything smells like campfire right now, my clothes, my hair, the inside of the camper…everything, and it’s wonderful.  It’s like a little piece of heaven.

From this morning, while we were getting the fire started back up to cook breakfast: 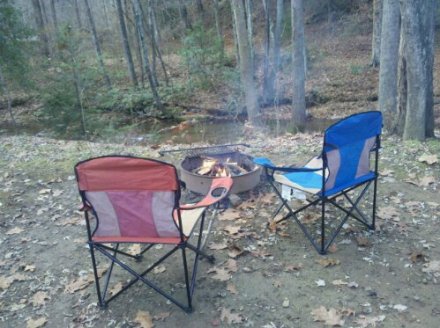 Chef Joseph and the bacon:

And a plate of goodness:  3 strips of bacon (I pulled off the fatty parts and tossed them in the fire), hash browns, two scrambled eggs, one piece of rye toast, and some coffee.  Food tastes better when cooked over an open fire. 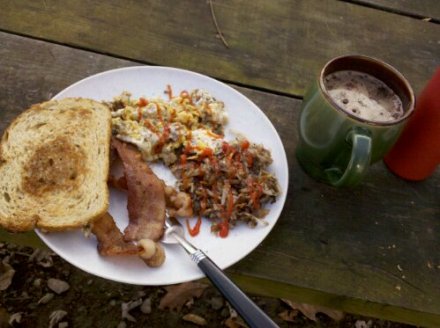 Yesterday, we found a funky local diner to have breakfast, it was called “Louise’s,” and it was definitely hipster-y grungy cool, but the food kind of sucked and the coffee came out of a pump caraffe, which is sign number one that the service and coffee are both going to be lackluster.  I’m not sure how much we spent, but I’m relatively sure it was too much.  But, it’s all good because that’s part of the adventure…finding little hole-in-the-wall places and new experiences.

I’m also bummed that we don’t have Ingle’s at home because it’s so much nicer than Harris Teeter.  We’re going to have to make our way out today because, among other things we’ve got to get, I forgot a hairbrush.  Yep.  a hairbrush.  The hat has gotten very liberal use as a result.

Now for a little chilling and doing this: 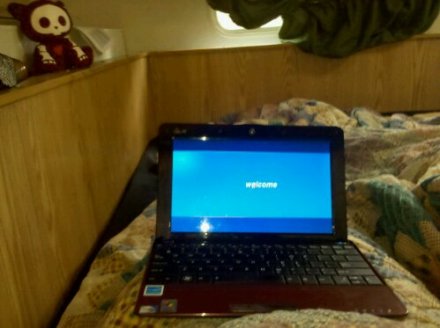 3 thoughts on “I Am Camping My Butt Off!”