I tried to find an archived image of my old Geocities website today. I was unsuccessful, unfortunately, but I did discover that Google Groups has archived messages from all of the Usenet newsgroups that served as a predecessor to today’s various means of online conversation (wow…that was a boring sentence). Basically, newsgroups were topical discussion boards with multiple threads and usually a committed core group that drove conversations and served as administrators.

Back in college, I was very active in a Stephen King discussion newsgroup and eventually broke off with a small group of people to form the group alt.underground. We were a close group, and remained lively for years, and I loved those friends so much. We spent the entire night of 9/11 comforting one another and talking through our fears…We went through deaths, marriages, divorces, moves. And you know what? I was the youngest member by far, and no one ever dismissed me or my opinions because of that.

Some of my old posts were cringe-worthy for sure (boy, did I appreciate a good flamewar!), but part of the beauty of having things that you write saved forever on the internet is that you occasionally come across something that made you proud.

Evidently, at some point in summer/early fall 2001 (not too long before Joey and I got together), I had a fight with my ex that prompted me to write this. I’m pretty sure we fought about my getting tired and falling asleep on dates…that was a common topic of “discussion.” Anyway…I wrote this to him (but apparently edited it to post on alt.underground also). It’s funny to look back and see how quickly that time did go. I don’t even remember if I gave it to him.
_______________________________
Why I watch the Golden Girls until 2am.

Because it makes me forget the bad things—the endings, the moments that were so incredibly perfect yet kill me with the knowledge that I’ll never be able to relive them. Because it makes me forget the fears of the future and because, for that little bit of time, I can sit with my mom as an adult, but also feel as safe as a child.
Because I know that moments like these won’t last. Because I can see them drawing to a close, even now and because I want to fight it with every fiber of my being. But you can’t fight time, can you? It goes too slow when you’re miserable and too fast when you’re happy and, in retrospect, it even went pretty quickly during the bad times, too. If there could only be one time of day in heaven, I would want it to be exactly 9:30am. Why? Because 9:30 is the best time in the world. Because at 9:30, [Dave has] emailed me once. I’ve seen an episode of the Golden Girls, and I know that Mom and I will sit on the couch for another thirty minutes with [our cat] and breakfast and one more episode of the Golden Girls to go, with the whole day ahead of us. It’s that time of day when I always feel okay, no matter what. It’s all downhill after 9:30. Because then there are a million things to do and no one stops to think until the end of the day, when we are all left wondering where all the time went. Time. Time is the worst enemy of all. It plods on at the same pace forever, never having enough consideration to make a wonderful moment last or to make a terrible moment end, mercifully, a little bit earlier than it should. It maliciously stands still in those awful moments, like five days ago when I thought that my father was dying. I hate time. I hate waking up and wondering how the past three weeks flew by so quickly, because I was too busy to even recognize their passing. I can’t stop time, but just for a little while, I can watch the Golden Girls; when the show starts, I am awash with a feeling of calm. I can be drawn into the lives of Dorothy, Rose, Blanche, and Sophia and live on *their* time. I can remember sitting in the living room with my mom in the evenings during college orientation when I was so scared; she put in a tape and we were okay; we watched the show and stayed up and talked late into the evening. Sometimes, I just want the feeling to last a little longer. And I stay up later than I should. I don’t think that’s such a crime, do you? 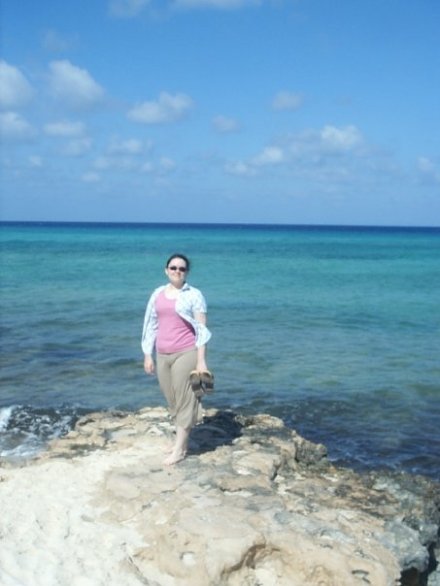