She’s so pretty, isn’t she?  I know it’s a little blurry…it’s hard to get a face-shot of her without her moving.

As usual, I woke up at 5:30 on my morning with no alarm.  I actually woke up at 5:25 and saw that my alarms weren’t set and freaked out, forgetting it was Saturday.  It hasn’t been too bad, though.  It’s 63* outside, so I’ve got the windows open and the breeze feels nice.  Shelli obviously likes it, too.

Today will be a thesis-filled day, which I research and write my first chapter.  The feedback on my introduction wasn’t too bad, and my advisor thinks that it’s headed in the right direction, so that encouragement has restored my self-confidence that I may not lay a steaming terd when this whole thing is said and done.

It’s been a rough week.  Phil found out Wednesday that surgery is not adviseable for his cancer.  Apparently the tumor is still too close to the vein to his pancreas, and doing surgery would just aggravate the cancer cells that are left and cause them to grow faster, so it would make his prognosis worse rather than better.  Even worse, he got the news during choir rehearsal on Wednesday, so he didn’t even have the chance to go home and process the news before having to tell us.  My heart is broken, and I’m having a serious crisis of faith about the whole thing.

What’s been pissing me off most, though, has been all of the “miracle talk” that’s still going on all over his Facebook.  Don’t misunderstand me, I do believe that miracles happen; I’ve seen things happen in my life that cannot be explained by any logical means without consideration of the involvement of divine intervention.  However, to continue to throw that talk out to him at this point trivializes the weight of his situation.  It’s flippant.  And it’s selfish.  I do believe that their intent is genuine; they want to see a miracle, and they want him to keep hope.  The problem, though, is that it does more harm than good.  Joey calls it “the Christian form of denial.”  Am I still praying for some kind of miracle?  Of course.  But, at this point, the definition of “hope” in this situation needs to shift and as such, so must the form of encouragement.

There are so many things that I think the Church (Big “C”) are getting wrong these days.  This is one of them.

This next week is going to bring us back into the nineties, which disappoints me.  I’m so ready for fall.  I come alive in Autumn and, for the past few years, in Winter, too.  It surprises me, because I used to have SAD so bad that I had to keep a UV bulb in my bedside lamp so I made it through the winter.  Now, the crisp coldness is a joy, and the few snow days that we do get are wonderful.  Precious few things are better than sitting in the living room with a steaming cup of coffee and the fireplace blazing while watching the kids sled down the never-treated roads of our neighborhood.  And the snow cream.  Can’t forget that.

Anyway, enough rambling.  Believe it or not, despite the tenor of this post, my meds are working quite well.  I am keeping perspective, even in my grief over the burdens so many of my friends are facing.  Once Joey (finally) wakes up, we’ll head out to Blessings Cafe for breakfast and pick up a track for the song I’m singing at James/Shannon’s wedding.  Then, thesis-thesis-thesis.

Here’s another Kins-bliss pic for your day:-) 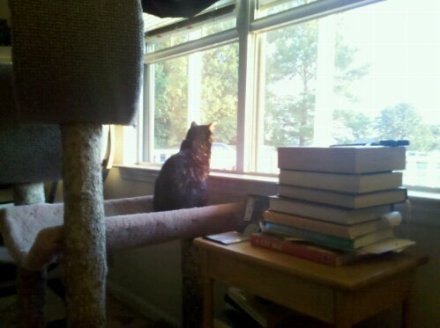 P.S–the title of this post comes from a Monkees song.  It’s quite beautiful.