So, I think that we may have folded laundry once or twice this past year.  I know.  Shameful.  I told Joey to take a picture of me under the giant pile of laundry I was slowly folding my way out of.  He said that he was too embarrassed…so I figured that I’d go ahead and put it out here for the whole interwebs to see.  Of course, if you’ve been reading my blog for any length of time, or you’ve read my hundred things about me post, this is no surprise to you.

We tackled the monster today and won.  And I’m going to have a big bag of stuff for Goodwill, too.  Maybe it’s also time for another yard sale.  While we’ve never made as much money as we made at the first one we did, it’s still a decent way to make a little dough for not too much effort.  Maybe in September.

I cannot WAIT to go camping.  Today, we went to Wal Mart and were able to outfit the camper with some pretty nice stuff.  I’ll feel a lot better Thursday afternoon when we’re all set up, but the thought of six days of camping bliss has me over the moon.  I hope I’ll be able to focus during work this week.  I’m already excited.

Also, it’s nice to feel excited about something again.  One of the things I missed most about mental stability is the ability to enjoy things *today* rather than always fretting about tomorrow or wishing that I’d taken more time to enjoy yesterday.  The day after we saw The Monkees, I cried of and on all day because I knew I’d never get to have that joy again.  It was like I completely ignored how insanely joyful the day/night was and focused only on what I’d no longer had.  I’m now able to see it for the joy that it was and, even though I doubt they’ll tour again in five years, I got to see them twice in my life.

A month or two, I would have been too overwhelmed even to look at the laundry pile in its entirety, much less than to touch it and definitely not to fold it.  I wouldn’t have been able to clean the coffee table or spend ten or fifteen minutes vacuuming the living room.  Tomorrow, I’m going to try to tackle the dresser.

Okay, enough of all of that.  Here are a couple of pictures so I’m not boring you with pictureless inner-monologues of rambling:-)

Me on the horse I rode last summer in Gatlinburg.  Her name was Daisy!!

All four of us on our horses 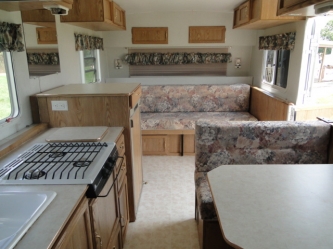 Here’s an interior shot of the camper

A shot from the other direction

Okay, folks.  I’m going to hit the bed, I think.  My low-battery light came on, and this post is too long anyway:-).

Well, I knew that I was going to miss part of church because I was meeting my friend Elizabeth at the antique show, but when she ended up getting sick and couldn’t go, I decided to go ahead and stay home from church entirely and Joey and I ended up going on our own.  I felt a little guilty at first, but I’ve enjoyed having an “oyster” so much that I think it was probably best for us.  Whenever Joey and I have a great day where we can do whatever we want, we call it an “oyster” (as in, “the world is your oyster!”).  And today was a pretty good one.

Check out this awesome birthday present that John got me!!

It’s a paracord bracelet!  That way I’ll have several feet of paracord (rated at 550 lbs) in case a situation ever arises that I may need it (read:  zombie apocalypse/government collapse/rioting).

I can’t believe that in less than two weeks, we’ll be taking our inaugural camping trip!  I can’t wait…after how difficult this year has been thus far, it’ll be nice to take a trip now that I’m feeling stable.

I did a cleanse for the last 7 days; I bought a 7 day cleanse by ReNew Life, and it was surprisingly effective.  I lost four pounds, although most of it was probably poop.

The downside of mental stability?  I can’t get away from my tasks now…thesis, and weight loss.

It goes without saying that Shelli thinks naps are awesome.  She’s a cat, so she spends somewhere between eighteen and twenty hours doing it.  And, since we keep it so cold in the house to save heating costs, she’s practically hibernating anyway.  But, to be honest, I’ve never been very big on naps.  I used to take them every now and then when I was in high school after I got home from school.  Until the past few years, though, Joey would be the napper and I’d stay up and watch tv or read or surf the web.  There’s so much going on these days, though, that I’m really starting to appreciate the joy of the nap…today, I slept for two hours and was so groggy when I woke up.  I hate being groggy in the afternoon, though.

I need to plan our menu for this week so we can go grocery shopping tomorrow.  While I didn’t stick totally to the plan for this week, we have had all of our meals at home and haven’t eaten out or strayed from the budget.  Our final grocery total for the week:  $49.00!  We were at $47, but we might have a guest for dinner tonight and needed to get him a potato.  I’ve done three new recipes this week also(Falafel, whole wheat pizza crust (with no yeast) and spicy baked potatoes).  Building your recipe repertoire is an excellent way to keep yourself from falling into the takeout trap.  Who needs to spend twenty bucks on dinner when you can whip up something pretty tasty in just a few minutes on your own?

Meal planning has also helped me to eat better this week, which will pay off for my weight loss goal.  Rather than hoping that the restaurant didn’t cook the food in tons of oil and knowing that they covered it in a greasy sauce, I know exactly what we put in the food.  And, I’m looking for ways to sneak veggies into everything I make.  My big success this week has been adding tomatoes to my omelets in the morning.  Sprinkle a little parm in there too and add hot sauce and it’s got a good buffalo flavor!

Yesterday was a pretty awesome milestone for me; a year and a half after I began treatment for my depression/anxiety disorder, I was finally able to go see my psychiatrist and tell him that I’m doing great and that I finally feel like I’m at a point where it’s manageable.  He was thrilled and really made me feel like I’d accomplished something huge, which I guess if I really think about it, I have.  So many people either never seek treatment or never follow through with it because it’s hard.  Depression/Anxiety is such a difficult thing to understand…you hate it and wonder why other people are able to cope with life, but it’s also what you are used to; it’s comfortable.  You desperately want to escape from the dwelling, fear, constant replaying of things in your mind, the repetitive negative and fearful thoughts, the hopelessness and worthlessness, but you also worry that, if you seek help, someone’s going to think you’re “crazy.”  You think that you may be blowing things up in your own mind and that everyone goes through this.  You’re afraid that, if you seek help and it starts to work, that it may stop and you can’t live with going back.

It took me years and years and years to finally admit that I probably had a problem that other people don’t have and that I needed to get help for it.  I had gotten to the point where I was asking him whether he thought I had cancer about every five minutes.  Because I work in life insurance, I didn’t want to go to the doctor because I know how much having tons of testing done can screw up your insurance rates (as though I was actually planning to apply any time soon).  I was paralyzed by the fear that every pain or little problem I was having surely must be terminal cancer…I had even gotten to the point that, when trying to make decisions, I would think to myself that it didn’t really matter because I wouldn’t be around to face whatever consequences there were.  And it wouldn’t stop.

The past year and a half have been a tough journey…the meds helped, and then the help would wane.  Once my anxiety was under control, my depression started to get a little out of hand.  But here I am, nineteen months later, at a point where I’m able to cope with the world.  Not only am I free of the constant fear that I have cancer, I also care enough to try to make changes to help prevent preventable illnesses.  I don’t leave a party or a night with friends thinking that I must have said something ridiculous and that they’ll never like me.  I don’t have days of diahrreah before I sing in front of lots of people.  I’m relaxed.  I care less about what people think of me.  I’m brave enough to do things that would have scared me before (firearms training and tattoos).  I finally feel like I’m relatively “normal.”

I still cry and cry over cruelty to animals, over injustice to people.  I still worry about my parents (although not to a crippling level anymore).  I still get down over stupid things.  But it doesn’t control my life anymore.  So, if you read this and you’re struggling with depression or anxiety:  GET HELP.  NOW.  Don’t think it over.  Find a good psychiatrist.  If you’re a Christian and you’re afraid, don’t be.  My psychiatrist shares my religious beliefs and would never blame my faith for any problems.  Don’t leave yourself at the mercy of well-meaning “Church” people who tell you to pray about it or to trust Jesus more.  That’s a load of bull.  These problems don’t have to do with your faith.  They are PHYSICAL problems that have MENTAL/EMOTIONAL symptoms.  You’re not a bad Christian if you have to have medication to help with that.  And if someone tells you that, then they’re not being a very good Christian.

When I got to the point where I felt overwhelmed by the prospect of having to spend the next sixty years of my life feeling this way, I realized that it was time for action.  Don’t wait that long.  You’re worth more than that.

Ok, enough of that….time to get to the potatoes:).  Have a good night!!