In the interest of full disclosure, I want you to know that, although there are days that are six miles walks with hiking boots on: 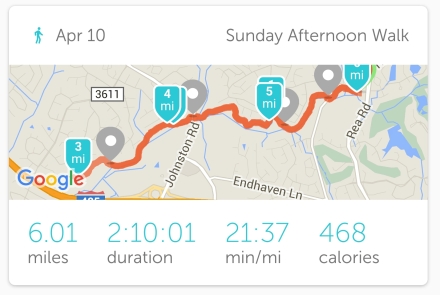 There are also days where I don’t leave the recliner, eat an entire box of Hot Tamales, skip my planned three mile workout, and then read sad things until I cry myself to sleep.

Some days are “Lupron Fails,” as Joey and I call them.  But it doesn’t happen every day.  It doesn’t even happen most days.  In fact, most days are okay, and some are even great!

Yesterday was a failure, but today will be better.

I had my first shot of Lupron Depot on Thursday, February 18th, at noon.  High noon.  Because I’m afraid of needles (and because I’m overdramatic), I treated the appointment like I was being marched down the green mile to the electric chair.  Honestly, if it had been anyone else, I would’ve laughed at them for being so ridiculous.  I mean, seriously?  I’d survived surgery.  A shot in the butt would be nothing.

I would’ve laughed until I saw the size of the needle. 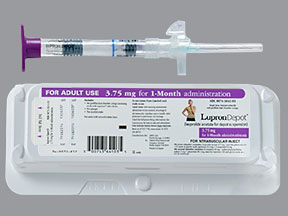 Guys, it was EVERY BIT of two inches long; even my husband, who is quick to (gently) pull me back to reality when I overexaggerate, admitted that it was one of the longest needles he’d ever seen.  Ginger, my nurse, made the mistake of leaving the box open when she brought the shot into the room.  “Is that entire needle going in me??!!”  Ginger was fantastic, though; she was the perfect combination of supportive and dismissive. “Yep, but it’s no big deal…you’ll barely even feel it; I promise!”

She asked me if I had any questions or concerns about the drug, and I was pretty frank about how nervous I was and how many terrible accounts I’d read online.  She echoed Joey’s comments about folks with positive experiences not generally taking to the internet about them, and she gave me the rundown of what to expect (the most common side effects, i.e., hot flashes and moodiness) and encouraged me to email them or call them if I thought I was experiencing anything out of the ordinary.  She also told me that the menopause-type symptoms probably wouldn’t start for a couple of weeks, but that I may have increased endo symptoms during that time, because your estrogen levels surge before they go away.  Thankfully, she’d allayed all of my fears, but (much to my chagrin), that meant it was time for the jab.

She had me lay down on the table since I told her I was scared of needles (and the fact that I looked like I was about to be given a lethal injection).  “We’ll go into your right side this time…we’ve got to alternate, so next month will be the left.”  Joey came back with me and held my hand, and I braced myself for the world’s largest shot in the ass.

And then it was done.  Just like that.  I can honestly say that I barely felt it at all.  Ginger became my new best friend and the best nurse in the entire world.  After a high-five and a hug, she sent me on my way, told me she was in on Thursdays and to plan my next appointment accordingly so I’d get to see her again.  She also reminded me to make sure I was diligent in taking the add-back medication and not to worry, that everything would be fine and it was going to be worth it to kick this endometriosis.

I had a sore butt cheek for a few days, and believe me, I milked that for all it was worth.  Joey already waits on me hand and foot, but I shuffled around and looked sad and pointed at my cheek whenever I asked for something.  I think it stopped being cute the second day, but he humored me until I really couldn’t justify it anymore because I felt fine.

So then began the “two week wait.”  And not the “fun” two week wait (the one where you wait to test to see if you’re pregnant). Instead, it was the countdown to becoming an overheated ball of emotions that falls down and forgets things.

Needless to say, once I made peace with the litany of terrible side effects I’d read about (even if half of them were exaggerated), I realized that I was going to need to adjust my weight loss goal to be a bit more realistic.  I’d only read one account of someone losing weight while on Lupron, so although I refuse to let myself believe that weight loss is impossible during treatment, I accepted the fact that I probably wasn’t going to be looking at completing my weight loss journey (to the tune of 50-60 more pounds) even if I was extremely diligent with food and fitness.  That was a tough pill to swallow, folks.  I’d already mentally prepared myself to bust ass and get myself to my goal weight come hell or high water, and now I was looking at having to dial that back (and maybe even accept that losing another 10 or 20 pounds would be a struggle).  After much cussing and crying, I re-evaluated and created a new set of “Lupron Goals.”

I decided that I wouldn’t express any weight-related goals in pounds. I know what I have left to lose, and I know that I want to lose as much of it as I can before we were to (potentially) get pregnant.  But I also know that giving myself a number at this point would be self-defeating if the Lupron keeps me from reaching that number as quickly as I want.  As a result, my goals (both weight-related and non) are not number-related accomplishments.

In no particular order: 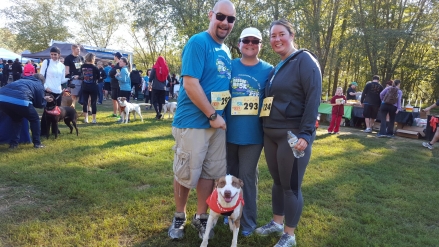 So, that’s it. No “be at a current weight by the end of the summer.”  No “stay under 100 grams of carbs every day.”  No “work out 5 days a week.”  I know what’s required to get across the finish line at a race and to the top of Mount Mitchell.  And every step I take toward that is a giant middle finger to the face of this drug that’s defeated so many women. 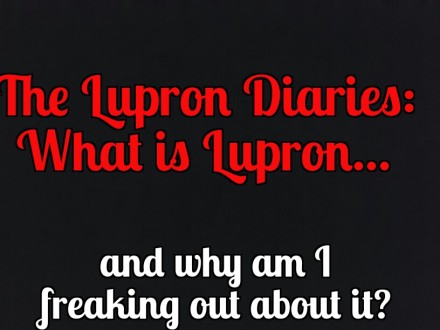 Yeah, I’d never heard of it either.  I’d never heard of lots of things before we started trying to have a kid.  All of the sudden, my vernacular is filled with acronyms that look absolutely ridiculous to the outsider: AF, BFP, BFN, DTD, BD, DPO, LH, HCG, CM, IB, TWW…ugh, the list goes on.  I swore I’d never be one of those people who wrote like that.  But all of the sudden, you’re on every fertility message board and it’s like your brain just oozes right out of your ears and all of the sudden you’re drooling and squinting to try to see if the result line on the ovulation test is as dark as the control line and your hand is covered in pee.

Lupron Depot is a drug that suppresses the production of sex hormones (read: estrogen) and is used for a variety of things, including endometriosis, fibroids, and even prostate cancer for men.  It’s injected, either monthly (3.75mg) or in a larger, 3 month dose (11.25 mg).  If it works, it reduces endometriosis in the body and helps slow/prevent production of new lesions.

Because it suppresses the production of sex hormones, it causes the body to mimic the process of menopause, which is about as fun as getting a shot in your butt every month that puts you into menopause.  There’s an add-back medication (norethindrone acetate 5mg)  that helps with some of the symptoms, but even the drug’s own website is pretty frank that Lupron treatment isn’t a walk in the park.

So, it’s clearly not a joyful experience.  However, what really freaked me out was the repeated accounts of massive weight gain and fits of rage.  Apparently there’s even a petition to Congress for further investigation to be done into Lupron’s side effects.  It’s alleged to have caused permanent damage and even deaths.  I certainly don’t want to be crippled by joint pain and thin bones for the rest of my life, and I can assure you that dying isn’t on my agenda either. So why am I taking this drug?

It’s interesting what you’ll do for the sake of having children. 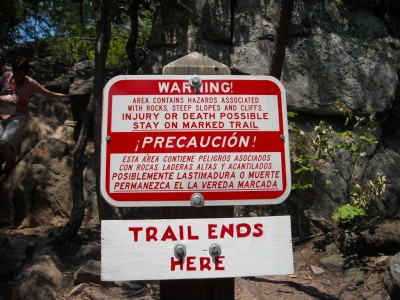 I’d made peace with the fact that we were going to have to put off trying for a kid for six months; in fact, I’d decided that I was going to make the most of the delay and complete my weight loss journey.  It would take some serious work, but surely I could get fifty pounds or so off in six months.  That way, I’d be in the best possible shape to carry a child when (hopefully) it happened, so I wouldn’t feel like I was doing nothing at all during the delay.

Then, I began reading accounts of women who’d taken Lupron.  And they scared the hell out of me.  Massive weight gain, crippling depression, dizziness, clumsiness, joint pain, forgetfulness, diminished mental capacity, bone thinning…no one seemed to have had a good experience on the drug, and more often than not, their accounts were something out of a horror movie; it seemed that no one made it all the way through the treatment before quitting.

Joey asked me over and over if I wanted to go through with it, and he assured me that he was okay if I didn’t…that he was more concerned about my well-being than the possibility of a hypothetical future child.  Conversely, though, he reminded me that it’s rare for someone to take to the internet with an account of a positive experience with a drug, and that I shouldn’t make a decision based solely on the mostly one-sided world of the interwebs.  I’m very thankful to have a husband who’s the voice of reason when I need it most.

Despite the fear, I knew it was our last non-invasive chance for a child, and at this point, we’re not willing to take more invasive measures, so there was no question that I was going to go through with the shots.  Weight gain, though?  I’d lost 44 pounds over the last 1.5 years, and I was scared to death of gaining it back.  Bone thinning?  That doesn’t go away or get better.  Forgetfulness?  I have an insanely stressful job that requires every bit of my brain function most of the time. How was I going to make it through this?

Between the time the Lupron arrived at my doctor’s office on Tuesday and my appointment for my first injection on Thursday, I agonized over my decision to go through with it.  All of these other women suffered, seemingly horribly, and here I was willingly walking into the fiery furnace.  But I also did something else, something extremely uncharacteristic of me: I decided that I was not just going to survive this Lupron treatment; I was going to thrive during it, and I was going to share my experience.  I knew that there would be negative side effects, but I wanted to prove that they were endurable and could be mitigated (maybe even overcome) with focus and diligence (and lots of prayer).  I wanted some poor, scared, woman, searching for answers about her upcoming treatment, to find my story and perhaps some hope that she wasn’t going to end up fat, senile, and riddled with broken bones.

So we got some calcium chews and threw out the junk food, and I registered for a 5K on 4/23 and committed to myself that I would run at least part of it.

And I tried not to think about the fact that I was going to be jabbed in the ass with a giant needle in a couple of days.