Today is going to be a good day!  It’s MLK day, so I’ve got the day off, and the morning is being spent like this:

I can never pass up a Shellikins on the lap; it’s a rarity for me, since she usually wants to be on Joey all the time.  So, it dawned on me that, because things were so crappy, I’d neglected to post the resolutions I finally came up with for the year.  Here we go!

In an effort to improve both #2 and #5, we bought a Wii with the Wii Fit Plus package!  It was a bit of a steep up-front cost, yes, but when we did the math, we’ll save about $300 over the year over our memberships to our gym, which just isn’t convenient to us and doesn’t really fit our schedules.  I prefer to workout in the morning, but to do that, I have to get there at 5 am, right when the gym opens.  As much as I’d like to, I just can’t get myself up at 4:40 to be ready to leave at 4:45.  However, I can get up at 4:55 to do thirty minutes in the morning before I get in the shower!  Or even get up at 5 to do 30 minutes since it won’t really hurt to be five minutes later. 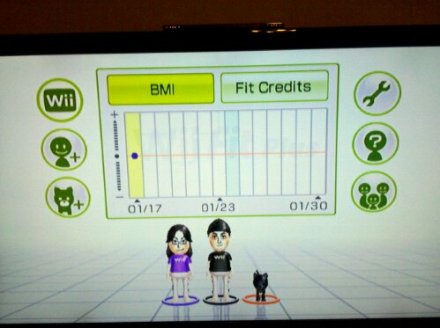 In other news, my prospectus draft has been submitted and I’ve gotten feedback, so the next step is revision and resubmittal, and then hopefully it’ll be good enough for submission to my committee for the meeting.  I’m feeling positive about it now rather than overwhelmed and my advisor is very involved in my progress, so I don’t feel nearly as lost.  Middle Eastern Lit has been interesting so far; I’ve read The Reluctant Fundamentalist by Mohsin Hamid, which was thought provoking and made me uncomfortable with my own thoughts/beliefs and assumptions.  That’s the sign of a good book, my friends; confronting uncomfortable realities isn’t a bad thing.  Too many people shy away from it.

That’s all; Maury is about to come on!