I let a couple of weeks go by without blogging; it’s okay…it happens. Vacation came and went, and unfortunately, it wasn’t the time of relaxation I’d hoped it would be. It started on a good note; we got $158 for our dishes, which was about what I’d expected, so I’m satisfied with that. It’s also good to have them gone, even though the cabinets are still in dire need of both purging and rearranging. That’ll come at some point.

I think the vacation was doomed to start. I really wanted a big trip like we had last year where we went to different attractions, museums, and tours. I didn’t communicate that well, so we ended up in a cabin in Asheville. 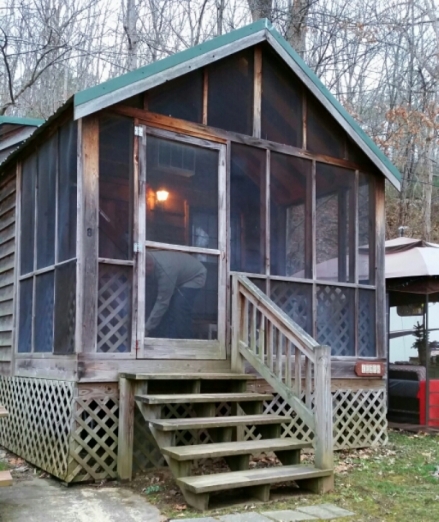 It was a gorgeous cabin right on the French Broad River, but part of the withdrawal symptoms from going off this Celexa (I’ll do a post specifically on that in the future) is his terrible feeling of malaise and irritability, and having too much downtime lets my mind just sit in that place and the depression snowballs on itself and gets worse. That ended up being exactly what happened.

That’s not to say that there weren’t bright spots, though! We had campfires the first two nights.

And steak and eggs for breakfast Tuesday (steak cooked over the fire)!

We went to the Museum of Cherokee History.

It rained all day Wednesday, and then I woke up Thursday with a cold. I swear, this is the fourth vacation where I’ve gotten sick. We ended up leaving Thursday instead of Friday so I could be sick at home. The last year is the sickest I’ve ever been, honestly.

I’ve been struggling with feeling “stuck” lately. We’ve reached a bit of a crossroads in our lives right now and are trying to figure out where to go from here, and that’s been challenging. I haven’t been praying or reading the Bible like I should; I know that’ll give us clarity and probably show us what to do but, for whatever reason, it’s proven to be easier said than done.

It’ll all make sense in due time, I’m sure.